The importance of biomarkers

As I have described before, the age of molecular therapies for the treatment of HD is around the corner. But a critical component of the drug development process is still lacking: the identification of Htt-dependent biomarkers. Why is this important?

Imagine what will happen over the next 1-3 years. Several of the molecular therapeutics aimed at lowering HTT expression will be tested in patients. The initial studies will be to assess safety and tolerability of the new drugs. They will involve a few patients, the studies will be conducted to ensure the invasive delivery of the agents will be safe. Remember that of the 4 programs currently in development, all require a surgical procedure, and two of them (the Sangamo/Shire and Genzyme/Sanofi programs) involve the administrtaion of the therapeutic agent in a viral vector. The vector will be adeno-associated viruses (AAVs) which is a one-time therapy. The virus will infect brain cells, will integrate into the host genome, and the therapeutic will be expressed for many years. The only other time where this has been tried in clinical trials has been in the context of Parkinson’s disease, when the growth factors GDNF and neurturin were delivered to the striatum of patients. We know from these studies that a one time injection of the AAV viruses leads to susteined expression of the forgein genes for 10 years or longer, and that the therpeutic was well tolerated (albeit with mixed efficacy results). However, once we administed the viruses, they are there for life. If something goes wrong, it will be a serious problem, so safety is paramount for these types of approaches. Simply put, they cannot be reversed.

When entering a new frontier, special efforts are needed to ensure we inflict no harm, and in order to know that the therapeutic is doing what is should. We expect that lowering HTT will lead to significant improvements in the progression of HD. But what about if we do these studies and we see nothing? We need to understand where the therapy was acting (what region of the brain?) and that it was indeed leading to a lowering of HTT levels. How much HTT do we need to suppress to see a beneficial effect? and how do we measure this decrease? This is why we need to identify biomarkers for the therapies, and biomarkers that are sensitive to HTT levels. Without these, it will be difficult to persuade companies to continue development of these potential life-saving therapeutics. Imagine we complete Phase II studies, see little evidence of efficacy (these studies willinvolve 30-50 people/arm) over a period of 1 year. Without making sure we know that HTT is being suppressed for the duration of this trial, would you enroll several hundred patients for a 2 year trial that costs many millions of dollars?

In order to prevent this question from being asked in the first place, we need to develop ways of measuring in patients that HTT has been lowering, and that an early measure of the lowering of HTT can be visualized in the patients. In order to do this, most of my work and that of my colleagues at CHDI and outside will be studying the earliest consequences of lowering HTT. We assembled a panel of experts to advice us as to methodologies we can incorporate to study the changes that the brain will experience when we stop HTT from eing expressed. Some involve an exploration of biomarkers using CSF, some involve imaging readouts. We have organized 2 symposiums at CHDI, and a third one is upcoming. After this initial assessment, the scientists at CHDI will be very busy trying to identify, explore and validate biomarkers that can be incorporated into the clinical trials. We are exploring whether HTT is detected in CSF through the use of novel assays which can detect very small amounts of HTT in this fluid. We are also trying to develop novel small molecules which can bind HTT and which can be developed as imaging tracers (similar to what has been done in the Alzheimer’s field). But we will also be exploring other imaging reagents, routinely used clinically in other fields, to evaluate whether the system is responding to a context where the patients no longer express HTT, at least in some part of their brains.

This is a very important component of our work over the next couple of years, and I hope to be reporting on our progress often. Even though we are just entering the era of molecular treatments, this will undoubtedly be a difficult and torteous road, but one which we hope will lead to the most effective treatment possible for any brain disorder.

Have a good day! 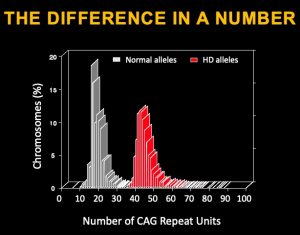