Updates on the clinical studies targeting HTT by Uniqure: AMT-130 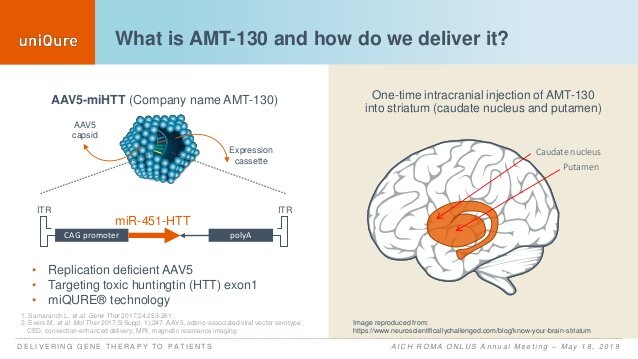 The field of therapeutic development targeting HTT is proceeding well. In addition to the ongoing efforts by Roche and Wave with antisense drugs targeting HTT, new approaches are making their way to the clinic.

Uniqure just put out a press release communicating that their clinical trial -the first of its kind, but not the only one in the pipeline- targeting HTT via the use of AAVs (adeno-associated viruses) expressing a small RNA (micro-RNA) molecule that degrades HTT transcripts in the brain regions infected by the viruses.

You can read the Uniqure press release HERE

AAVs form a large family of DNA viruses that normally infect mammalian tissues, including the brain. There are many forms of these viruses and because of their simplicity to manipulate, the ability to produce large amounts of them, and their relative safety profile, particularly in the central nervous system, have been preferentially used as brain therapeutic agents. Their use in humans for Parkinson’s disease, for instance, to express the growth factor Neurturin or BDNF, precedes their use for Huntington’s disease by two decades. Because of this, we know that some forms of these viruses, including the AAV5 type (the one used by Uniqure) and AAV2, have been shown to work well and be well tolerated for at least a decade.

In HD, the Uniqure program and its therapy targeting HTT, called AMT-130, is the the first such therapy to be tested in patients.

Uniqure is a leading gene therapy company based in The Netherlands, and they have been the first company to reach this milestone in HD. Because AAVs infect brain cells and their DNA remains in the cells for the life of the cells, the therapy is thought to be permanent. The miRNAs targeting HTT will be expressed for the life of the patients, leading to a sustained suppression that requires that initial single administration. That’s what we hope. One surgery, and done.

The good news about this is that the treatment is permanent, and would lead to a continued suppression of HTT in each and every cell infected by the virus. The bad news is that, in the event something goes wrong, one cannot remove it.

If you want to read more about the approach Uniqure has taken, click HERE for the company’s video explaining their strategy.

I have collaborated with Uniqure as part of my role at CHDI Foundation, where I lead the HTT lowering strategies. Uniqure tested their AMT-130 therapeutic agent in pigs that were engineered to expressed mutant HTT, and this work was instrumental for Uniqure to assess safety and efficacy. This pig ‘model’ was developed with funding and scientific oversight by CHDI, and led by a very nice and talented scientist, David Howland, who had the foresight and patience to implement these programs a decade ago.

Uniqure’s studies in the HD pigs showed broad-spread suppression of mutant HTT in the large pig brains, with little evidence of adverse side effects. Uniqure scientists and management are careful and committed. Indeed, they are still conducting long-term (5 years’ long) studies with AMT-130 in the pig HD model, to further show safety over extended periods of time. The regulatory agencies only require 1 year of safety data prior to proceeding to human trials.

In their recent press release, Uniqure just announced that initial findings show their therapy (which includes a neurosurgical procedure as the AAV viruses have to be delivered to the areas affected in HD) is well tolerated, allowing them to proceed to the next step of clinical development. This study will be slow and it will take 5 years to complete, due to the precautions we must take when using these types of permanent therapies. By commencing first, Unique is also paving the way for other companies attempting similar strategies, for example Takeda (theirs is the only mutant HTT-specific targeting therapy via AAV delivery), and Voyager, who is developing an AAV-driven miRNA therapy as well.

While the announcement might not appear that significant, it is.

The administration of these AAVs requires a significant surgical procedure where high doses of the viruses are injected in the regions of the HD brain most affected by the disease (the caudate and the putamen nuclei of the basal ganglia). Patients enrolled in these studies are Stage 1 patients (within 1-2 years of being newly diagnosed), and by then these people already have very significant amount of degeneration (neuronal loss), which is though to be in excess of 50% of all the neurons normally residing within these structures.

Accompanying neuronal degeneration is typically a highly inflammatory environment, which might pose a challenging landing pad for a viral therapy. The results that the surgical procedure and the initial signs following AAV5 infection are all positive bodes well for this class of therapies. A key worry I and many of my colleagues had, was what would happen when AAVs were administered at very high doses in symptomatic patients. Please remember that none of the animal models of Huntington’s we have ever developed (and we have developed many) do not suffer from the extent of neuronal loss and inflammation seen in human patients. Therefore, we could not model this aspect of the disease when evaluating the safety of these agents prior to going to human trials.

Even though the news update refers to only 2 patients and for the first 90-days after the surgeries, it seems, so far, so good.

A final worry (one that keeps me awake many nights) is the fact that lowering both the normal and mutant copies of the HTT gene might lead to problems down the road. So far, in these two patients, we do not see any worrying signs. Even though it is too early to claim victory not this front too, it is nonetheless encouraging. Lowering normal HTT might lead to problems that would negatively affect the development of HTT-targeting therapies – all of them. Therefore, this remains the biggest worry in my mind today.

Just a final comment on the fact that this is FIRST HD therapy targeting HTT that is treating the regions most vulnerable in the disease, the deeper brain structures of the basal ganglia. The studies Uniqure has presented with these viruses (AAV5 produced by the company) in both pigs and primates has shown a remarkable distribution of the viruses after injection, reaching not only the basal ganglia, but also broad areas of the thalamus and cerebral cortex, regions that we know are affected in HD.

The comparison the clinical safety and (hopefully) efficacy to the ASO trials currently underway will be hard – as the ASOs target mostly the spinal cord, the cerebral cortex and the cerebellum, and much less efficiently, the basal ganglia. The AMT-130 therapy leads to an almost opposite pattern of HTT suppression: the cortical targeting is limited to the neurons that innervate the caudate and putamen, and not the entire cortex, but the basal ganglia nuclei should be well covered.

So comparisons between these two approaches will be difficult (if not impossible) to interpret. However, these two technologies offer a lot of promise for families. In the next 2-5 years we will know whether these therapies work, and to what extent they help the patients. This is a new era for all of us involved in HD.

Lets keep the momentum going and the hopes up. There are reasons to celebrate these small, but significant, steps. 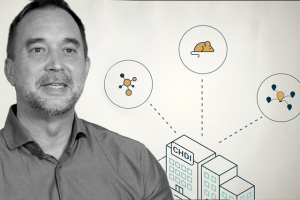